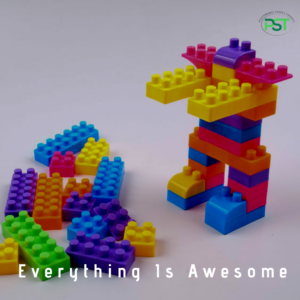 I have to admit that the tagline on the photo is a blatant steal from the Lego Movie.

If you haven’t seen it, I have several times now, though not by choice, the main character sings this at the start of his day. Well before everything goes a bit Pete Tong and Bad Cop and President Business get in on the act.

When back pain, or any other issue, appears on the seen it can seem a bit like this where one day it’s “Everything Is Awesome” and the next it’s like you’ve been struck with the evil Kragle and can’t move.

It’s pretty hard to feel like everything is awesome at this point.

Then after a while, it can also be hard to picture when everything might be awesome again.

You might start to avoid exercising, doing the garden, playing with the kids you name it pain can have an insidious way of making its way into every part of your life. This can be to the point where you stop doing all the things that give meaning to or bring enjoyment to your life.

Now imagine if you were able to get back to all of these activities how this might make you feel?

It would feel pretty good, wouldn’t it?

The regaining the confidence to tackle these activities is something we look to build into all our programs.  By making the treatment process a very active one rather than simply a passive one where you lie on the table we can ensure that by the time we wind things up that you are good to go.

They had come in with knee pain and the goal had been to help them get ready for the Kilt Walk. Due to a couple of things out with both our control we didn’t finish up treatment before the walk. Late on Sunday, I got an email saying they hurt everywhere except for their knees. I don’t think I’ve been happier with a client telling me they were in pain. They were pretty happy too.

No I’m not a sadist before you ask. Rather everything that hurt was hurting due to the not having been able to get in as much training as would have been ideal but their knees, the problem area, were absolutely fine!

I knew that the aches and pains that they were suffering from would fade over the next few days.  Then, later in the week, we could clear up anything else at the next appointment.

If this sounds like a path you’d like to take why not fill in the form for one of our Discovery Visits and see how we can help you.