Plyometrics are an often misunderstood and misused form of training, think box jumps in a Crossfit WOD. We make use of them in the mid to late stages of our lower body rehab. But why do we use them? Their main purpose is to teach you to be more explosive or to create faster ground reaction times. That is to hit the ground and come off it again as fast as possible. This is essential in any sport that requires you to run or jump. 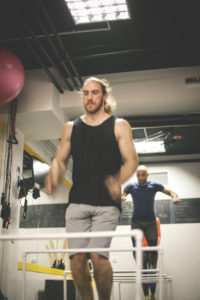 Strictly speaking, plyometrics are exercises that require you to jump, land and rebound into another jump straight away. Exercise like box jump aren’t plyometrics but do fall into the continuum that leads to actual plyometrics. Only the way there are various forms of jumps, hops etc. These might be a simple jump and stick where the goal is to achieve a solid landing with no wobble.  Box jumps where the goal is the development of explosive power.

These all are developing the first part of the equation in that you are looking to be explosive in the movement. They move towards being able to stick the landing which is the first part in creating the stiffness required. Actual plyometrics then take this further and require repeated jumps. This requires the stiffness to be switched on and off again just as in sports.

In our rehab protocols, we make use of them to ensure that you are as robust as we can make you by the end. The progression through rehab is about exposing you to greater and greater challenges in a graded manner. In doing this we continuously demand that the body adapts to the new stimulus and allows the rehab to blend back into actual training.

Good rehab will work on returning lost movement and making you strong again but we feel that this isn’t enough.

Being strong is only one part of the picture, an important part but only one part. In sports that require running and jumping there is a need to be able to create stiffness. This stiffness is developed to resist the changes in your centre of mass as the foot hits the ground. There are very large forces being resisted, the forces the come from hitting the ground, and transmitted, the ones that are propelling you forward or upwards. If we miss out developing or rebuilding this, we risk not ensuring that you are robust enough to return to action.

The stiffness isn’t just developed in the lower body or any single area. It is a system wide tension that involves not just the muscles but the ligaments, tendons, joints, fascia. Basically, all the structures have a role to play.

Achilles tendon rehab is a great example of the use of plyometrics. In the early stages of treating achilles tendinopathy, we make use of the seated calf raise and really load it up. This is still only light work for the tendon even when using up towards 2x body weight. The calf raise does a great job of beginning the process and strengthening soleus in particular but the tendon needs more load. This is where plyo’s come in.

We starting off with a jump and stick. This is where the effort is primarily on getting a good landing and absorbing the associated forces. This focus on absorbing the forces on landing is fundamental to progressing the rehab forward. If you can’t decelerate well then you aren’t in a position to accelerate and this under pins everything we do. We progress this through to repeated jumps from bilateral to unilateral going bilateral jump and stick to single leg jump and stick to repeated bilateral jump and stick, single leg repeats and so forth. The goal is to gradually expose the tendon to the types of forces that you get when running and jumping.

It is only through this type of exercise that we can really hope to truly expose the tendon and the surrounding structures to the type of loading you experience every time you run.

The use of plyometrics in a performance setting is simply a progression of the rehab protocol. The goal here is exactly the same. To develop the stiffness and reactive ability. Any decent sports training program will include a strength training component but we need more than this. To really make the most of what you can do there is a need for plyometric work. As I said above we want to create stiffness in the leg allow for making use of the stretch shortening cycle and more explosive reactive force development.

Strength training will develop this within the muscles but doesn’t affect the other tissue to the same effect. We can build on the type of work that is used in rehab to develop these properties. Depending on current strength levels and experience you may start in the mid to late phase of what we might use in rehab and build from there. The goal is to develop to the point where repeated hips and bounds can be used. used.  This really helps improve the ability to create the stiffness we require and develop a really explosive reactive ability.

For runners this translates into quicker turnover and improved cadence. This happens as you aren’t spending as long in contact with the ground. The fastest runners spend the least amount of time on the ground.

Plyometrics, when used appropriately, are of great benefit in both rehab and performance settings. The key is build into them starting easy and builing confidence, strength and ability.