There isn’t a week goes by when I don’t hear someone talk about how they have tight stiff hamstrings. That even though they get regular massage and that they stretch them all the time it never changes. If that sounds like you then read on. 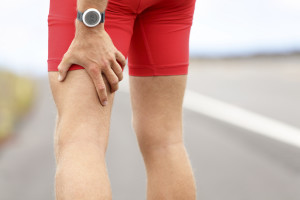 Let’s start by looking at the function of the hamstrings when you are running, jumping or walking.

The primary function of the hamstrings as we run, walk or jump is to extend the hip, stabilise the knee and decelerate the lower leg. If you have tight stiff hamstrings all the time then I would bet that one of these is an issue. The most likely one for distance runners is that the ability to stabilise the knee is poor. For anyone involved in high speed running, it might be in decelerating the lower leg.

The hamstrings work in conjunction with the gastrocnemius to hold a slight in the mid stance phase of gait. This is important in it allows the more torque to be generated at the hip. The position allows you to effectively use both the hamstrings and glutes to maximum effect. It is no coincidence that this is the same position weight lifters are in at the top of the 2nd pull, just before they hit the bar with maximum force.

In running the position allows for better force absorption on ground contact. The stiffness is also where the propulsion comes from as it allows the upper hamstrings to contract hard at push off. If you lose this stiffness then there is more force transmitted towards the hip and the upper hamstrings have to work harder to create hip extension.

How to improve things

We view posterior knee stability as a vital component in lower body rehab, not just with hamstrings. robust rehab program. When the posterior knee stability is off we always see that the upper hamstring is stiff and tight. In the clinic, we go through a multi stage protocol to improve this. The process goes from gentle isometric exercises to high load, explosive movements that are designed to not simply restore the ability but really ingrain it. The result of this is a reduction in protective tone in the hamstrings.

Good hamstring strength is a great asset to anyone involved in sports. Anyone who runs at high speed in their chosen sport places a big demand on the hamstring with regards to how it controls the lower leg. Sprinters are the obvious example of this but field sports probably place an even higher demand on this ability. In rugby, football, hockey etc the speed is not as high as in sprinting but the sprints happen more often and are interspersed with other activity. This type of situation leads to greater overall levels of fatigue.

One of the best exercises to reduce the chances of hamstring injury are Nordic Hamstring curls. Nordics have been trialled in a number of studies and show positive results in rugby and football. Nordics do a great job of strengthening the hamstring in the range and type of movement that can cause the problem when sprinting.

Tight stiff hamstrings seem like part and parcel of running but they don’t need to be. In the first instance working on developing good PKS ensures good hamstring function. I recommend checking out Bas Van Hooren for some ideas on this. It also goes without say that you want to get the hamstrings stronger so that they can tolerate the loads you are placing them under. The nordic hamstring curls are a great addition to any strength training program as would deadlifts, RDL’s, single leg RDL’s and even hamstring curls.

If you would like to enquire about an appointment then click HERE or to speak to us HERE to arrange a phone call.