ems from back pain to illiotibial band syndrome. 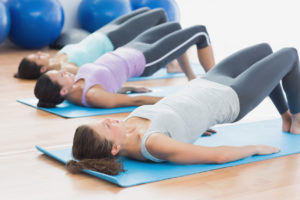 When the glutes aren’t firing

What & where are the glutes and what do they do?

Gluteus maximus is one of the biggest and strongest muscles in the body> The primary function of glute max is that of extending the hip. Gluteus medius and minimus are both responsible for abducting the femur, moving it away from the midline.

The glutes in walking and running

Lieberman et al 2006 found that the glute max wasn’t doing very much during walking on the flat or uphill. Once you begin running things change. When running Lieberman found that the gluteals controlled trunk flexion on the stance leg and to help decelerate the swing leg. On the stance leg, it was also involved in controlling hip flexion and extending the thigh. The study by Jonhagen et al., 1996  found that in sprinting the glutes were contracting as hard as the hamstrings at foot strike. The contractions were, at times, much higher than what is expected from a voluntary contraction.

In walking, we can see that the glutes aren’t particularly active but when running this activity jumps up significantly. When you are running the primary role of the glutes is to stabilise the hip. All 3 of the gluteals contract at once on foot strike in order to achieve this stabilisation effect. The contraction on foot strike is higher than what is achievable for you to achieve voluntarily. That is to say if I ask you to perform an exercise you couldn’t contract them as hard as you do involuntarily on foot strike. When you are walking around there aren’t the same forces at play and the demands on them are much lower. Even when walking they are still active but at a much lower level.

Simply put, if your glutes weren’t firing you wouldn’t even be able to stand still, you would fall over.

Are they strong enough?

The strength of contraction at foot strike when running and the general forces involved may be a clue as to what the problem is. It may simply be you aren’t strong enough.

Running is a relatively low-level activity in many ways but the forces involved are high. The peak forces involved start at 3x body weight and go up from there. You need to be strong to deal with these types of forces, not weightlifter strong but strong none the less.

Let’s look at two different eras of running for some inspiration on strong runners.

From a historical perspective, the Australian running coach  Percy Cerutty is a great example. Percy insisted that his runners, 800m to the marathon, with Herb Elliot the  1960 1500m gold medalist being one of his charges. Cerutty placed an emphasis on his athletes being strong and required they be able to deadlift twice their body weight. A double body weight deadlift is pretty strong and there is no way you would have weak glutes if you could perform this.

In the modern era there is Mo Farah and his coach, Alberto Salazar. Mo went from not really doing any weight training to speak of to working with a coach that insisted on it. Mo now squats in the region of 1.5 times his body weight through the year. This again isn’t going to happen with weak glutes.

You might not be an elite level runner but there still is room for getting stronger. The absolute weights aren’t huge but when you look at them in a % of body weight they stack up well. It also lets you see that you don’t need to be the strongest person in the gym. Rather you just need to be stronger than you are now.

One of the biggest reasons for including strength training in your training is it helps reduce the chance of injury. There have been a number of studies showing that the inclusion of weight training substantially reduces injury rates.

The stiffness and tightness that runners can experience in the hamstrings, glutes, and calves can be reduced by getting stronger. The stiffness is often a result of the body looking to protect itself. The tension is the brain’s way of limiting your exposure to the movement it can’t control.  Getting stronger will allow you to better tolerate this and thus your training mileage. You’re work in the gym allows you to be able to deal with the peak loads you experience when running, thus reducing the fatigue.

In the clinic improving, the strength of those that come in is often the first thing on the agenda. We start this with simple easy work like side lying leg raises and gradually work up to heavier work such as lunges, deadlifts and squats. If you are interested in improving this side of your training then feel free to get in touch.