In part one, we talked about the general idea of good or neutral posture, what may cause us to be unable to maintain this and what we can do to combat these issues. What we will look at this time is what is happening in the lower trunk and legs and what to do about it to help us maintain a more neutral posture. In the lower half of the body possibly the most obvious problem is an anteriorly tilted pelvis. This can be caused by a number of factors but often neglected is that the person may lock their knees when standing  as we can see here. 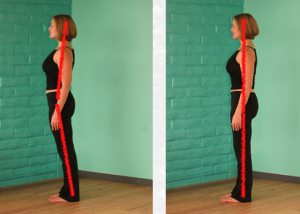 This has the effect of exaggerating tghe appearance of any anterior tilt that is present but when you look at the pelvis in relation to the femur you get a better picture of what’s happening, and by simply teaching them to soften the knees the degree of tilt can be reduced and the tilt with regards to true neutral is mush easier to determine. If this is done and other tips are given to help create a “longer” torso a more correct picture of what is going wrong can be seen and together can create  a tool to help reinforce the benefits of the any work done to the soft tissues.

One of the quickest ways of getting big improvements is to target the hip flexors and superficial fascia of the pelvis. Tight hip flexors inhibit the glutes, hip extensors, and through our largely sedentary life styles are one of the big contributors to disrupting our posture and this is also a big issue in athletic performance where the glutes are the powerhouse of so many activities. This inhibition of the glutes makes it difficult to recruit them to pull the pelvis posteriorly and back into balance. The anterior tilt also makes it difficult to recruit the musculature of the lower abdominals so you can see why when you are asked to bring your pelvis back to neutral by contracting both these groups it is possible to do but difficult to hold and as such simply trying to strengthen either of them may be a challenge for some and even for those who can still isn’t going to cut it since there is still a downward pull on the pelvis.

Long periods of sitting are likely to shorten/tighten the illiopsoas group which when tight is going to pull the spine anteriorly from the psoas attachments to the vertebrae. This causes the pelvis to tip forward as the movement in the lumbar vertebrae force a change in the position of the sacrum and hence the pelvic bowl. While illiacus from it’s attachment to the iliac crest will rotate the pelvis anteriorly. We are also likely to see a shortening in rectus femoris which will pull the pelvis inferiorly from it’s attachment on the ASIS and finally the superficial fascia around the hip crease becomes short and tight, think a scrunched up towel. So what are we to do about this?

One of the best ways to tackle the tight and short hip flexors and general tension in the superficial fascia is the “couch stretch” made famous by Kelly Starret, so named as the idea was you can do it on your couch while watching the TV so there’s no excuse for not doing it! We can do this in two steps with the easier position being with the front foot on the floor and a harder position where both feet/legs are on the couch, this position can also be done on the floor against a wall.  If keeping the torso tight and upright is too much of a challenge in either of these positions the standard hip flexor stretch done on the floor which doesn’t involve as much knee flexion is where to begin.

The other area we really want to improve is the glutes. Sitting all day really has a negative impact on the function of the glutes and we want to go after them with a 3 pronged approach using some stretching, some soft tissue work with a ball and finally some activation/strengthening work. You want to get a hard rubber ball, the type you might give a dog, for the soft tissue work and it should only cost £2-3. We are going to stretch the hip structures as demonstrated here. For the activation and strengthening work we want to use two exercises; the glute bridge and the clam shell. The glute bridge, check out “It might not be your back“, is a general tool to get you used to activating your glutes, I would recommend it as part of any athletic warm up, so make sure you begin the exercise by actively contracting them or you may find that your hamstrings kick in first and you don’t feel much happening with the glutes, try it both ways and see how it feels. The clamshell, this is a slightly more advanced version using a band for added resistance but this isn’t needed,  is used to target glute medius specifically as even when the bigger glute max is in reasonable shape I often see this muscle with poor tone and really not working at all which is bad news for your stability when moving.

This gives us a couple of areas to work on towards having better posture and the benefits that come with this but is obviously not all that is going on in the lower body and working the lower leg and foot as well as the adductors is something that I’ll cover at another time. Next time we’ll look at the upper body and what can be done to make improvements there and hopefully I’ll have a camera sorted out and not have to steal Kelly’s video clips.

5 Replies to “Improving your posture Pt2”