DOMS or delayed onset muscle soreness is something that everyone has experienced regardless of training history. You don’t even have to have trained to experience it. You have just decorated the bedroom and you have sore shoulders, that soreness is DOMS. Often thought of as a sign of a good training session, nothing could be further from the truth.

In tech speak the pain is caused by an increase in the acute loading that is sufficiently above your chronic loading level that you aren’t ready for. You react to this in an adverse manner that is painful.  The unwanted pain of DOMS is a secondary reason why you should build up the volume and intensity over a period of weeks. The primary reason for the gradual build-up is to reduce the risk of injury. DOMS is painful but it isn’t an injury. A good rule of thumb is to use increases of no greater than 10% per week.

10% isn’t set in stone but most people will not suffer any negative symptoms at around this level, This goes for DOMS or actual injury, more on this in another blog later. Some can’t tolerate 10% yet others can go above this but it is a good starting point. That said you can’t avoid the potential for it after a holiday and in this case you just have to expect it and suck it tup.

In short no. There is little inflammation present where there is DOMS type pain. In fact, one of the ways of dealing with the pain, exercising again, actually causes more inflammation! it may be that the pain you experience is caused by the suppression of the inflammatory process. In the study below they found that inflammation held steady or went up with repeated bouts of exercise but the pain went down.

“Overwhelmingly, our data undermines the idea of a muted inflammatory response after the second bout of exercise. On the contrary, the data suggest a neutral or increased inflammatory response! … We saw that inflammatory indicators only increased after a second workout. This suggests that the initial workout may have sensitized the muscle toward a stronger, longer inflammatory response after the second workout. In other words, the muscle seems to “remember” the stress of the first workout and responds with a stronger recruitment of immune cells when the stress is repeated — much like the way our immune system responds to an invader by preparing for an even stronger response the next time. Furthermore, muscle soreness goes down when the inflammation goes up, indicating that’s unlikely the soreness is caused by inflammation.”

What about lactic acid?

Lactic acid, or more correctly lactate, production is essential to proper muscle function, especially at higher intensities. It is also cleared very quickly so doesn’t hang around long as it is used as fuel. Lactate reduces the pH of the muscles as it uses up the hydrogen ions that are floating around as a result of muscle contractions. Lactate, therefore, is helpful in avoiding another means thought to cause DOMS in the acidification of the environment within the muscle.

Could it be your nerves?

This one may have some legs.

A Japanese study looking into the causes of DOMS studied the possibility of it being related to the effect on the nerves. In the study, they investigated what happened if you suppressed the development of new nerves after exercise. When the substance that is secreted to stimulate new nerve growth was blocked from doing its job there was no pain in the 24-72 hour period where one would normally expect to see it.

What can you do?

Check the internet you’ll find that there are many different ways to deal with your unwanted pain but what amongst them actually work?

Pretty much a no, unfortunately.

Often touted as a means of reducing inflammation it doesn’t help in this manner either. This is for two reasons

2. inflammation isn’t responsible for DOMS in the first place. 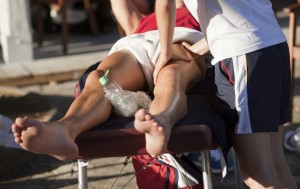 On top of this, a hard massage can actually make you sore. It can be useful for some immediate relief but it still doesn’t help with the longer period involved with DOMS. In this post, I looked at when best to get a massage with regards to getting the most out of it.

The conclusion from the study stated.

“Massage therapy was more effective than no intervention on the post-race recovery from pain and perceived fatigue in long-distance triathlon athletes.”

This, as I said, wasn’t about DOMS but the post-race pain and fatigue. 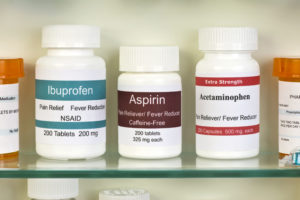 On top of the fact that anti-inflammatories don’t help with DOMS specifically, they are of no use when taken in the absence of injury at all. In this article in the BJSM Prophylactic misuse and recommended use of non-steroidal anti-inflammatory drugs by athletes they found that they are potentially harmful if the practice of using them as a prophylactic is continued long term.

The use of heat can be beneficial but needs to be used for such a long period. To be effective heat pads must be worn for many hours rendering them impractical. Even if it wasn’t, application of heat for long periods is a stressor and will negatively impact overall recovery.  20 minutes in a hot tub is great for recovery it just won’t prevent the classic pain 24-48 hours later.

Unfortunately doesn’t really work either. Anecdotally it seems to help alleviate the symptoms to some extent but you’ll still suffer the pain of DOMS. There are no studies showing any large positive effect of more exercise. More exercise helps you reduce the stiffness that accompanies DOMS and because you are moving better you feel a bit better.

Stretching has it’s uses but two where it doesn’t have any positive impact are related to pain. It has no significant impact on reducing injury rates and has no effect on post-exercise pain. The two studies below take different approaches. The first was a direct study of the impact on people of the use of stretching and the second was a review of 12 studies that looked at the impact. Neither found that there was any beneficial effect from passive stretching.

Stretching to prevent or reduce muscle soreness after exercise.

“The evidence from randomised studies suggests that muscle stretching, whether conducted before, after, or before and after exercise, does not produce clinically important reductions in delayed-onset muscle soreness in healthy adults.”

FIsh oil is touted as a cure for many, many things but it doesn’t help DOMS.

Vitamin D is really important for many processes in the body. For those of us in northern latitudes, it is worth taking some through the winter to help out with the lack of sunlight to help prevent Vit D deficiency. Vitamin D deficiency is much more common than you might think, we really only get it from sunlight, so it is one of the few supplements that are worth taking. A lack of vit D is related to pain perception and fatigue so it is worth making sure you get enough.

Curcumin is a compound found in the spice turmeric. It is one of the few things that seem to have a positive impact on post exercise pain. The study below found it to have a significant impact, though it was a small sample size. The results were very positive so all we need now is some repeated testing.

“Oral curcumin likely reduces pain associated with DOMS with some evidence for enhanced recovery of muscle performance. Further study is required on mechanisms and translational effects on sport or vocational performance.”

There isn’t anything you can do to alleviate DOMS!

The best thing you can do is avoid spikes in your training load and have an easy week after a long break from exercise. Stay on top of your general recovery strategies, making sure you sleep well and eat well.