With such a wide range of amazing scenery on display Scotland is a great place for running be the events on the road or off road. There are races the cover everything from the flat expanses of East Lothian to highest peak that Scotland has to offer and everything in-between.

So suffice to say whatever type of race takes your fancy you are likely to be able to find it somewhere in the country. 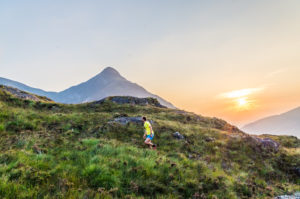 Not a single race but  a week long event the Cape Wrath Challenge is a series of races over the course of the week culminating in and off road marathon which would be challenging enough but also includes a climb over over 2,400ft! The mid week races cover distances from 5 miles up to half marathon and one, on the beach, where the distance is tide dependant. The Marathon at the weekend can be run solo or as part of a team of 2 or 3 runners.

Like Cape Wrath this is another trail race starting in Glencoe and climbing up onto the Aonach Eagach Ridge via a fearsome 500m climb up the Devil’s Staircase. The race includes a total of 1600m of ascent with views of some of Scotland’s highest peaks before finishing at the foot of the big yin itself Ben Nevis.

I would suggest infinitely more interesting than the Edinburgh Marathon itself, in my opinion. The Seven Hills of Edinburgh doesn’t have a specific route beyond you have to cover all of Edinburgh’s 7 hills starting on Calton Hill before you finishing back on Calton Hill. The course is just over 14 miles and has 2,200ft of ascent/descent and takes you around the city from Edinburgh Castle, Corstrophine Hill, Craiglochkhart Hill, Braid Hill, Blackford Hill and Arthur’s Seat. It takes the top finishers around 100 minutes and has to be one of the most interesting city races about.

4. The Glasgow Half Marathon

A bit like the Edinburgh Marathon the event takes place over the whole weekend and includes everything from a 100m toddler dash up to the half marathon itself. The half marathon route encompasses many of the parks that are the reason that Glasgow has more parkland per capita than any other European city.

To finish with with have a duathlon of epic proportions. Taking you from the capital to the summit of Ben Nevis it’s not for the fain of heart as it comes with a 20 hour time limit. The start is an easy 13 miles out to South Queensferry where you jump on the bike for a 180km cycle into the highlands where you ditch the bike for your off road shoes for a wee marathon distance to the top of Ben Nevis. To be fair the kindly organisers do throw in a hot meal at the end, though there is no mention of new legs.

Hopefully this will have given you some ideas for future challenges of a running nature.

To get in touch and enquire about cost and availability simple click here.