When we think about posture we could really do ourselves a favour and stop thinking about what is good or bad posture in terms of black and white, what is right or wrong, what can or cannot be changed END_OF_DOCUMENT_TOKEN_TO_BE_REPLACED

This is a great podcast with Mike Stewart that is a must listen for anybody working with people suffering with pain of any kind or who just want to get a better understanding of the science behind it all.

We’ve all seen athletes be they on the running track or a football pitch with various pieces of brightly coloured tape on their bodies. The tape is likely to be kinesiology tape and whilst it really first came on the scene at the 1988 Seoul Olympics, though it has been around since the 1970’s, and it really gained a lot of exposure at the 2008 Beijing games. I must admit I came a bit late to the use of Kinesiology tape though I had read quite a few articles around it’s use and the perceived benefits within a treatment protocol. I have to say I was a bit skeptical about it but it was definitely on my to do list with regards to finding out more about it. Earlier this year I went on one of Rocktape’s courses after reading a lot of good things about their courses in comparison to others with regards to the content and their approach and I have to say I wasn’t disappointed as the course was indeed very good covering a lot of the research on the tape, it’s effects and why it may work. This was great as they discounted many of the more outlandish claims and reasons why it may work. Rocktape aren’t afraid to acknowledge the limitations of what taping can do, Andy Caldwell, the instructor on the course was very clear about it being a tool that can aid the recovery process and that it’s use did not negate the use of standard rehab protocols, nor do they try to hide studies and we were presented with both positive and negative results from various studies and highlighted the limitations of many of the studies whether they were negative or positive in the results.

Since I’ve been using the tape in the clinic I’ve seen some very useful results in the form of symptom/pain reduction. With myself as an example, I have been suffering from quadriceps tendinopathy in my left leg for some time and I tried the tape out on it. The pain was affecting me when I was running and squatting and whilst it didn’t prevent me from doing either  it was very annoying. With squatting it would take a good few sets before it felt the pain disappear and the movement feel smooth whilst with running it was just general niggle during and after the run. After the tape was applied I noticed an improvement in movement and the level of discomfort the following workout was reduced and similarly when I was running. I still had to rehab the area but the reduction in pain definitely was a bonus during the first 2-3 weeks as the rehab got a chance to have an affect.

With two different clients I have seen useful results. In one case they were experiencing pain in the plantar fascia and up into the achilles insertion and whilst the taping didn’t seem to reduce the symptoms at rest they were able to run without pain after we applied a spiral line of tape from the foot to the hip. In another client they were experiencing a redction in lateral flexion and rotation to the right through the torso and after the application of tape along the lateral line on the right we saw an improvement in both movements.

We looked at the idea of the need for movement freedom and less “control” previously in this post. In this paper looks at the need for movement, the extract is here, in the lumbar spine when we are looking at postural recovery in response to unexpected movement. Again we are talking about getting comfortable with moving and not locking ourselves down with the fear that unexpected movement will hurt us.

These free workbook by Greg Lehman is well worth downloading  whether you are a therapist or somebody in pain. Used as part of one of Greg’s workshops it is full of very useful information from deconstructing some of the myths surrounding pain to how to choose and set realistic goals.

This is a great little video that explains that though we all experience pain we all experience pain differently. Put together by Karen D. Davis, PhD. Karen is a Professor in the Department of Surgery and Institute of Medical Science at the University of Toronto, and heads the Division of Brain, Imaging and Behaviour – Systems Neuroscience at the Toronto Western Research Institute.

The study talks about exercising 3x a week for 30 minutes in healthy individuals. If we are talking about those suffering from chronic pain we might want to increase the frequency but decrease the length of time. Even going for a very short walk of 5 minutes at a time can make a significant impact. From there we can increase the number per day and then perhaps the number of times per day but the bottom line is that easy effort aerobic exercise is good for dealing with pain.

I’ve mentioned previously about how little our static posture relates to back pain and that it is the lack of movement that is more likely to be implicated in any issue we may have. Getting more movement into the day is crucial and Richmond Stace at the Specialist Pain Physio put it really well in these 3 points. END_OF_DOCUMENT_TOKEN_TO_BE_REPLACED 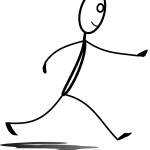 We all want to move better, more fluently and smoothly. A quick take home I got from the DMS course last weekend was that most of us, I include myself here, don’t really use our arms correctly when we walk. What we are more likely to do is get what appears to be arm swing from rotation of the shoulder girdle rather than from the shoulder joint itself.  END_OF_DOCUMENT_TOKEN_TO_BE_REPLACED