Squatting is about as natural a movement as you can get but it is a skill that we in Western Europe and the US/Canada rarely practise. As such, as with any skill, not practising it means we lose it. Our lifestyles mean we do not need to squat in order to do anything then combined with a sedentary lifestyle has resulted in many of us losing the ability to do it well. As young children we have the ability to do it but often find that by the time we are adults, at least in the Europe/America, that we have lost the ability simply, I suspect, because we do not make use of it on a daily basis. 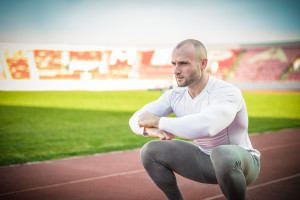 As we get older and we not only lose the ability in terms of having the range of movement but also the control over the movement. If you maintain the ability to squat that you have as a child you don’t just maintain it you actually get better at it. This is because you don’t have as favourable leverages as you did as a child so you really require to do more work to be able to perform it.

This is not to say that you will look the same in the deep squat position as an adult as you did as a child, that would be impossible given the anatomical differences, injuries or just life in general. That said if you are able to spend the time developing the ability to squat again and get to the point where you are comfortable sitting in this position then you are likely to find a host of benefits in terms of general movement.

From a performance point of view when doing a back or front squat ensuring that our hips and ankles are working well means a better distribution of the weight and effort. If we need to make accommodations due to restrictions in movement at a particular joint it will increase the stress elsewhere. This isn’t a big issue for the most part but can eventually limit performance and, if sufficient, be a potential cause of injury if the load becomes large enough.

So if you have an interest in improving your ability to squat well here is a little series of drills to help you.

If you would like to enquire about an appointment then click HERE or to speak to one of our therapists HERE and we’ll call you as soon as we are free.